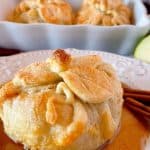 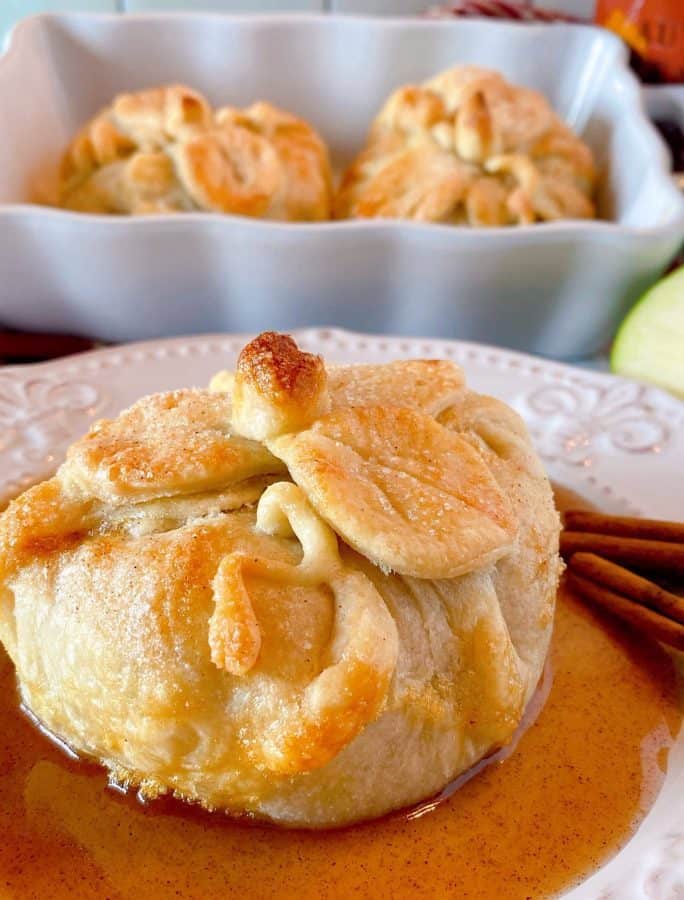 Baked apples filled with cinnamon and pecans wrapped in flaky pie crust and drizzled with a rich cinnamon sauce. A delicious Fall dessert that stands on it owns, but a scoop of vanilla ice cream wouldn’t hurt!

Do you really believe that? I’m not that organized…EVER! (Just ask the laundry that has been washed three times cause I can’t remember to put it in the dryer!)  The truth is… that a few weeks ago I was busy in the kitchen whipping up a few Fall Recipes. One recipe I really wanted to tackle this year was Apple Dumplings. I’d never made real honest to goodness Old-Fashioned Apple Dumplings before! I’ve made the crescent version with mountain dew…but I wanted to make a batch of Country apple dumpling from scratch with pie dough.

There’s just something so cozy about crisp autumn apples wrapped up in a homemade pie crust and baked to a golden crisp sitting on top of a pool of warm cinnamon sauce. When I think of a true Fall Harvest Dessert…Baked Apple Dumplings come to the forefront of my mind! (Let’s be honest here…dessert is ALWAYS on the forefront of my mind…sitting there right next to the homemade rolls!)

How To Make The Best Homemade Apple Dumplings

This recipe begins with the delicious nutty spiced filling that will go in the center of each apple. In a small bowl combine 3 Tablespoons softened butter, ½ cup of packed brown sugar, 1 teaspoon cinnamon, and ¼ cup finely chopped toasted pecans or walnuts.

TIP: To toast pecans or walnuts place in a small non-stick skillet over medium heat, constantly stirring until a nutty aroma begins to fill the air and the nuts slightly change color. Remove from heat immediately and place in a bowl or paper plate to cool. 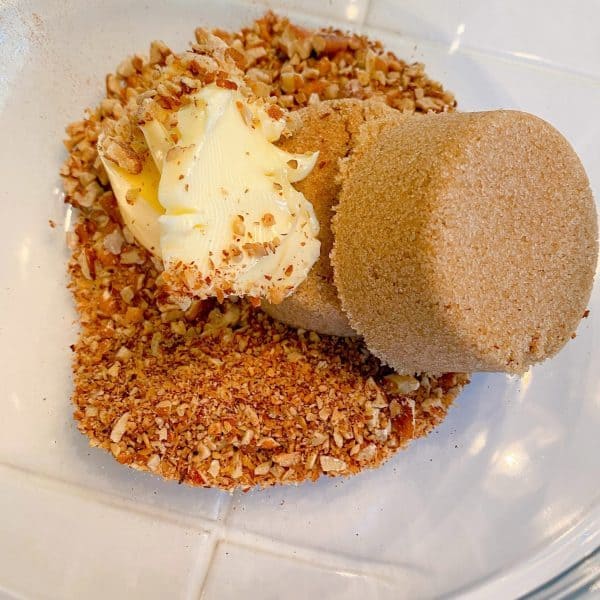 Using a fork mix all the filling ingredients until well combined and crumbly. Set aside as  you prepare the apples. 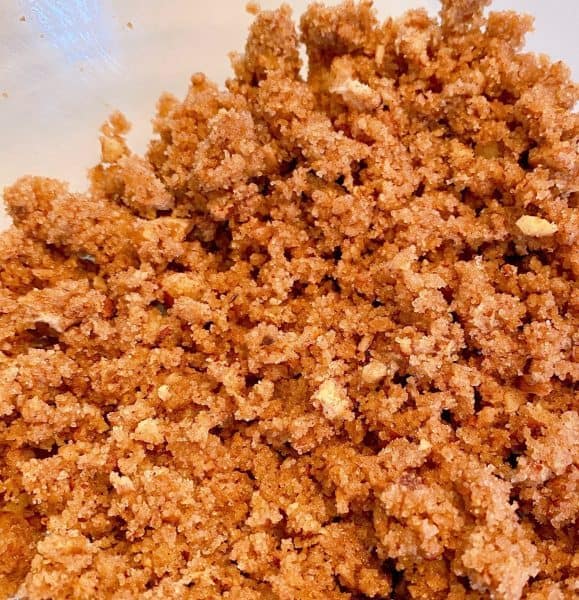 You can use any variety of apple for Apple Dumplings, but in my humble opinion, there are definitely some apples that are better for baking than others. My “go-to” baking apple is always a Granny Smith! They’re a nice firm apple with just the right amount of “tart” to offset the sweetness of the brown sugar in this recipe. My advice is to use any variety of “tart, firm” apple you can find in season. They’re truly best for baking.

Wash and peel Apples of your choice. Cut each apple in half and remove the core from each half to create a nice little center to hold the cinnamon brown sugar nutty filling. I know it looks like I took a years worth of 2020 frustrations out on those centers! I couldn’t find my apple corer…so I just hacked away with a knife. It’s okay…they are going to be snuggled up inside the pie crust any way. 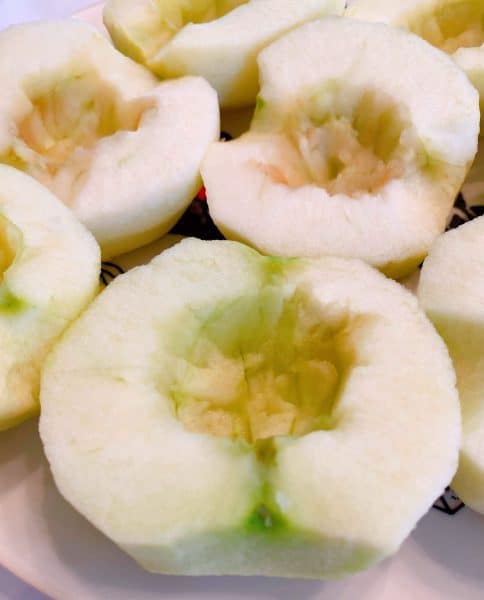 Cut a thin sliver off the bottom of each apple so they can lay flat during baking. (I wish I could cut a few slivers off my backside so I lay flat…but then I’d just eat apple dumplings!) 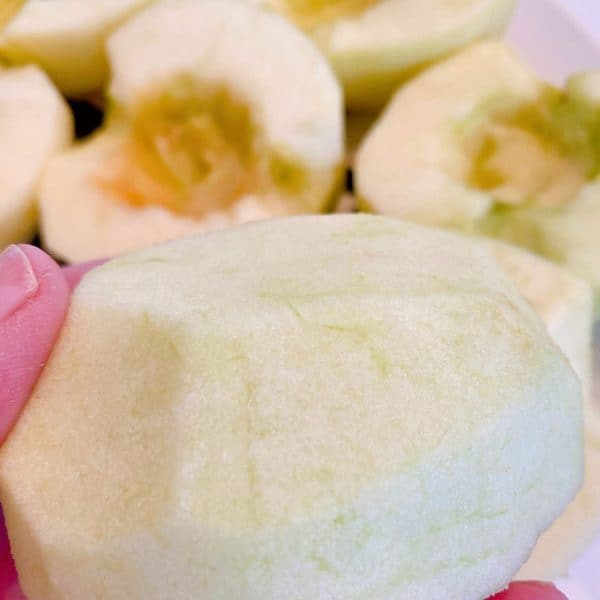 For the pie crust you have two options! You can use store bought boxed pie crusts. Which is fine. No judgements here.

Unroll one of the dough sheets onto a floured work surface, I love to use my “dough disc” it’s one of my favorite kitchen tools and is used weekly at this Nest. I’ll link to it below in my recipe card. Stop by and check it out! It’s truly life changing when it comes to working with doughs of all types.

Pull on the sides of the dough to straighten rounded edges, roll it into approximately a 12-inch square. Cut the dough into four 6 inch squares.

The second option is to use my Traditional Pie Crust Recipe and double it for two crusts, just like a double crusted pie. Once the crust is made roll it into a large circle and trim it to a 12-inch square. Then cut the dough into four 6 inch squares, same steps used with the store bought ready crust.

TIP: Use a pizza cutter to trim pie crust into squares. It makes cutting much easier and prevents the pie dough from tearing. 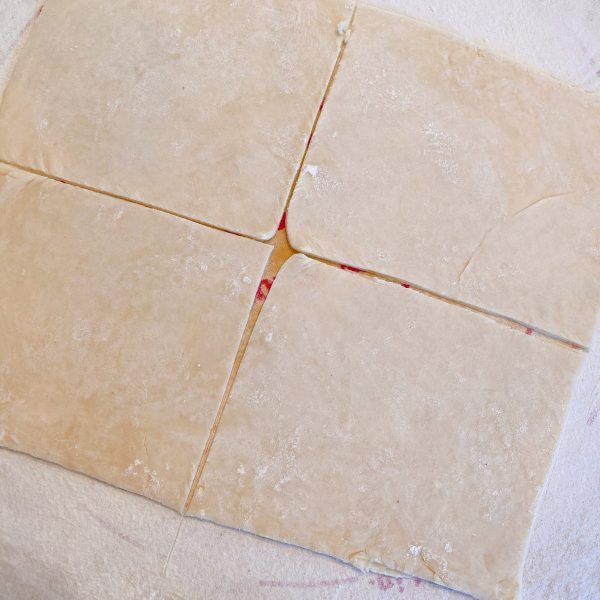 Lay each apple in the center of each 6 inch pie dough square, core side up and that flat slivered bottom down. Spoon a portion of the cinnamon nut mixture you set aside, into each hallowed-out apple core. 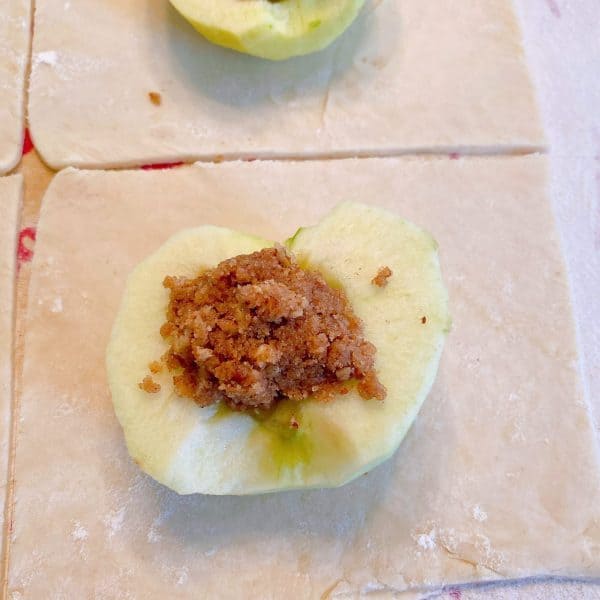 In a small bowl whisk one egg white until frothy. Using a pastry brush, brush the perimeter of each square with egg white. 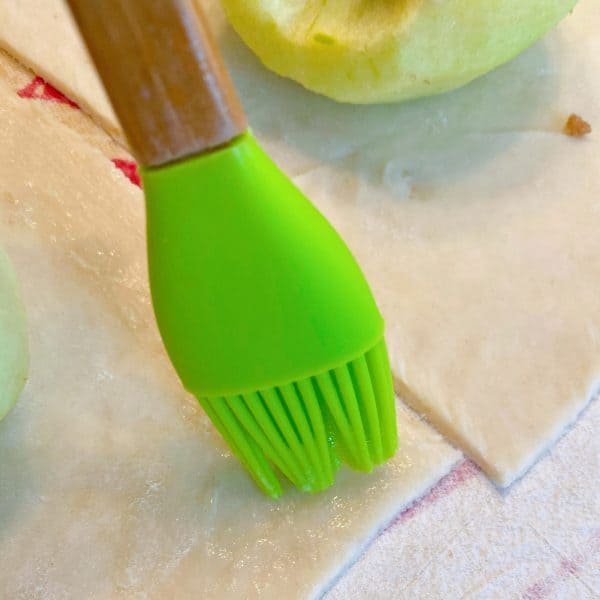 Bring the 4 corners of dough up around the apple and pinch the edges to seal.

TIP: You may need to gently pull the dough to cover the apple. Bring up opposite sides rather than the sides next to each other. Pinch the very top after all the corners have come together. 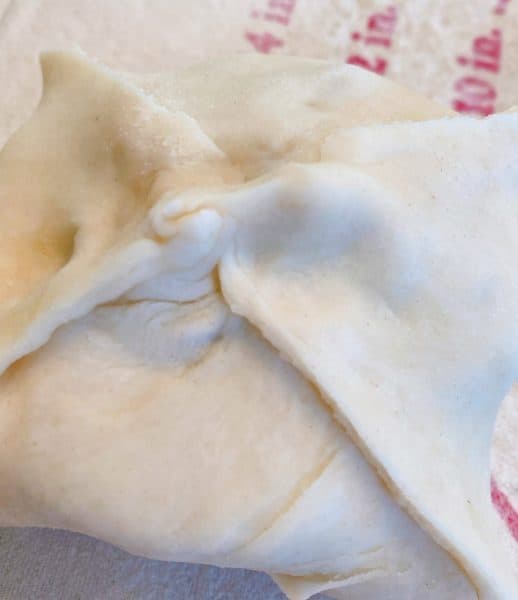 Place the dumplings on a large baking sheet covered with parchment paper.

This next step is totally optional! I love to decorate with pie dough. It’s like “play dough” therapy for me. If you don’t want to “doll’em up then just skip this part and go down to the next paragraph below. My reason is the cut-outs cover a lot of “mishaps” when shaping the dough over the apples.

Honestly just think of the pie dough as play dough and you’ll have loads of fun! You can find small cookie cutters the shape of leaves and that makes it easy peasy! I’ve posted a link below for some fun shapes for Fall. (Remember I am an Amazon affiliate so I make a small commission, at no additional cost to you. Full disclosure.)

Brush the top and side of each dumpling with the egg white wash. 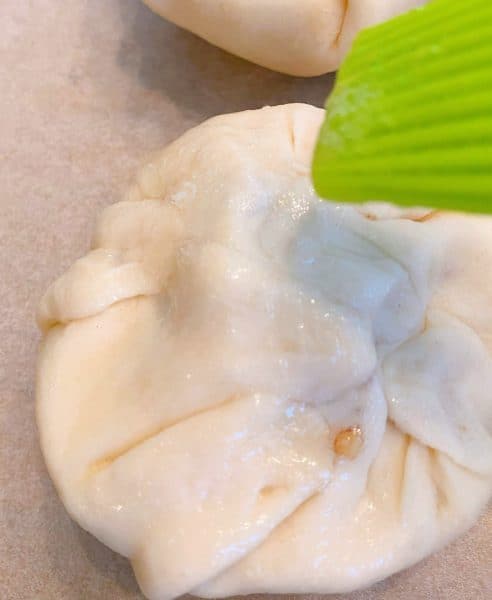 Stick the leaves, vines, and stems on top of each apple dumpling, then gently brush them with the egg wash too. Sprinkle with cinnamon sugar. 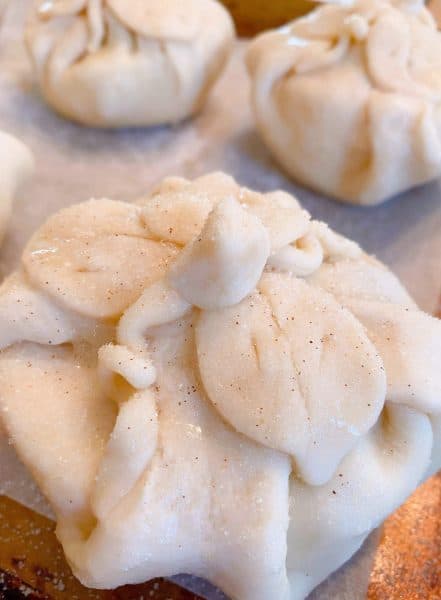 Place dumplings in a preheated 425° oven for about 10 minutes, until the pastry sets and starts to turn golden brown. Reduce heat to 375° and bake until golden brown, about 20 minutes longer.

NOTE: If pastry begins to brown too much make an aluminum tent and cover apples until ready to remove from oven. 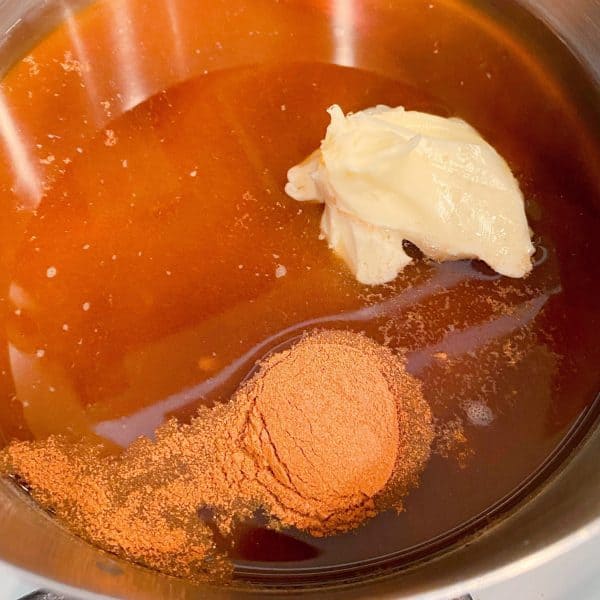 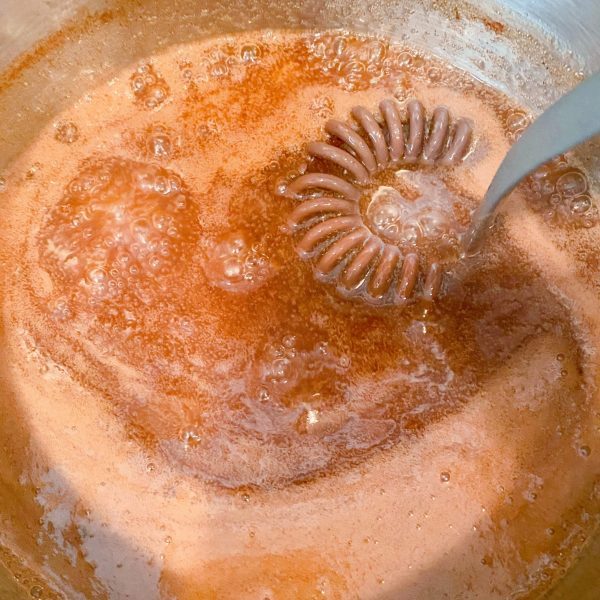 Aren’t they pretty? They smell amazing…the hints of apple and cinnamon wafting through the air is sure to give you all the “Fall” feels. 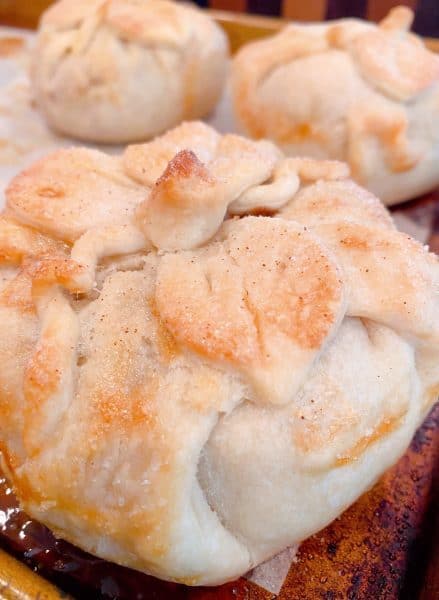 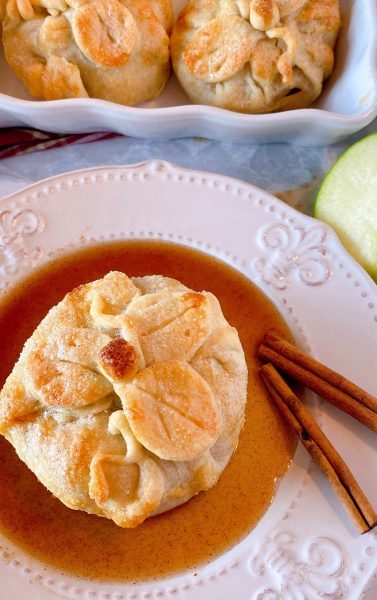 Wanna take a peek inside? I know you do…let’s take a look.

The apples are tender and juicy. The cinnamon brown sugar nut filling pops out and pairs so perfectly with the tender flavorful apples, and the combo of tart with sweet blend superbly! 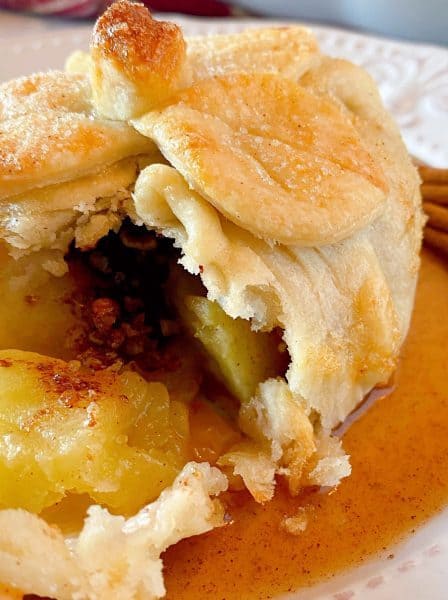 Honestly this is the BEST Apple Dumpling ever! You could make the dumplings ahead of time.

You can even make the cinnamon sauce in advance and just reheat it when ready to serve. 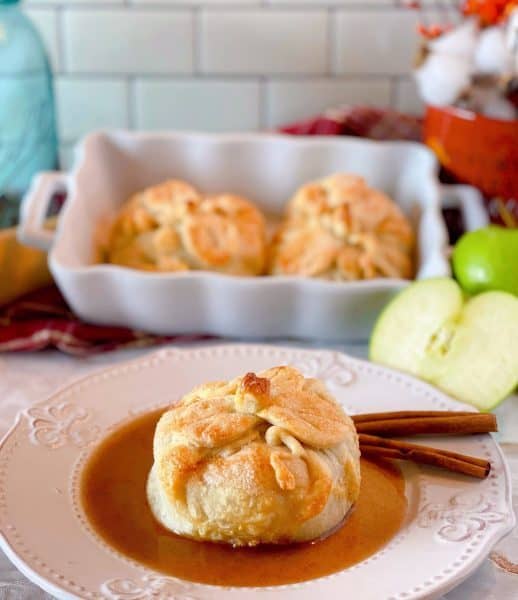 My “non-pie-loving” husband inhaled one of these dumplings in just a few seconds and had another one later that evening. If that isn’t a testimate to how good they are…I don’t know what is!

This classic dessert originated in the Eastern United States and are a very common recipe among the Amish. They are  often eaten for breakfast. I’m thinking the Amish are my people!

Whether you’re having them for breakfast or as a dessert they’re a great Autumn treat that your guests will love. I hope you love these wonderful Homemade Apple Dumplings with warm Cinnamon Sauce sometime this Apple Season and have fun making them. 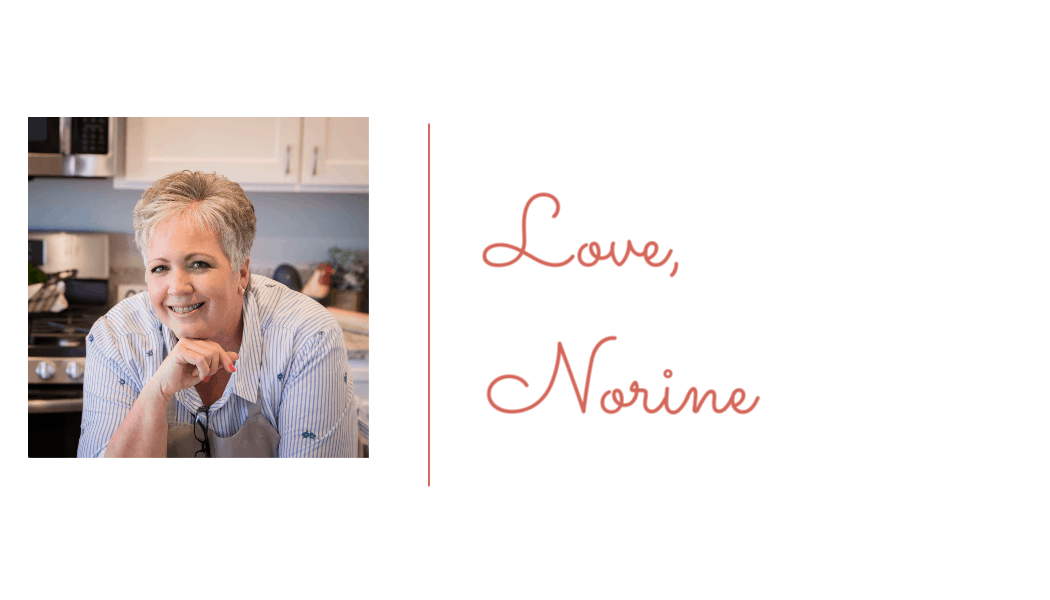 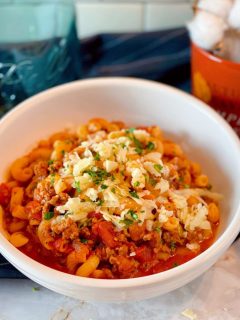 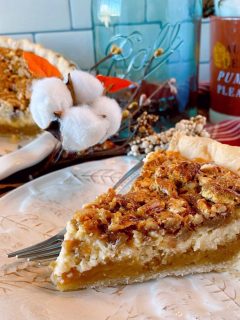 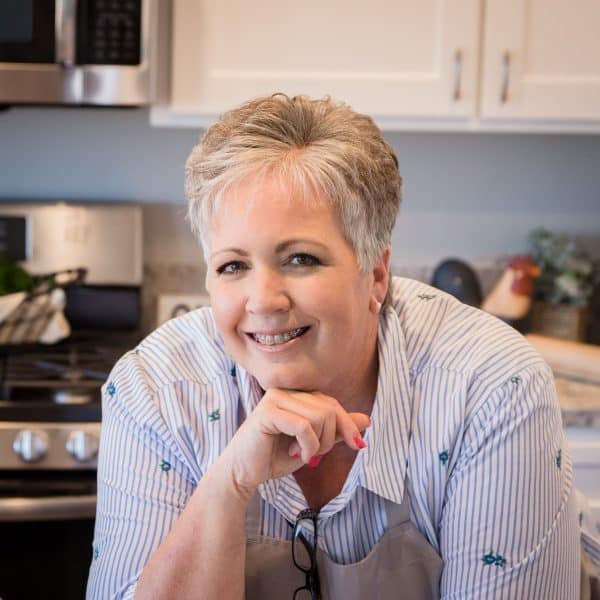 Subscribe to blog to receive notifications of new posts by email.